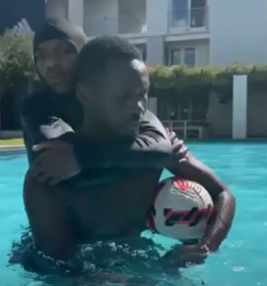 Every Kaizer Chiefs fan will be loving this. Amakhosi are currently in camp as the DStv Premiership second round nears closer.

KAIZER CHIEFS PLAYERS SWAP THE FIELD FOR THE POOL

With the league only resuming on the weekend of 15-16 February, most fans do not really know what their teams are exactly up to – except for Kaizer Chiefs fans.

As The South African reported on Sunday, the Glamour Boys have not just resumed training like other clubs, but Amakhosi have been camping at a secret location.

Besides hard training on the field, what else could the boys be doing at the camp? Well, a fun swimming pool session is one of the activities we have spotted.

Check out the three-minute video below… you will see your familiar favourite players such as Dumisani Zuma, Happy Mashiane, and others.

One player that stands out is Khama Billiat. Firstly the Zimbabwean star stands out with a weird dark suit that covers his head. Secondly, Billiat is seen throughout the video clinging to Eric Mathoho like a young boy on his dad’s back because he can’t swim.

Imagine his farewell. Kaizer Chiefs superstar Itumeleng Khune has given a strong response to suggestions of his retirement.

Fact is, Kaizer Chiefs’ Itumeleng Khune is not getting any younger. However, we are talking about a goalkeeper here and we all know how long they can keep going.

Do you all still remember his debut before he remarkably displaced the splendid but underrated Emile Baron? It was the year 2007 when Baron was injured. The then coach Muhsin Ertugral put all his trust in the kid from Ventersdorp. Read the full story here.

Repo rate spike – Bad for the indebted, good for those with cash to spare

Advertisements The repo rate is up by 50 basis points to 4.75% as inflation bites, …