Samsung is certainly a better company today when it comes to software updates. From the ghost of Touchwiz, Android fragmentation, the company now sits among the best in software updates. For example, nowadays, it promises up to four years of Android updates for some of its flagships. Even a few mid-range devices are part of this commitment, while in general, they get at least one major Android update. Apparently, despite the multitude of devices it has released in the past years, there is still room for 2015 smartphones. Today, the company is rolling out a new software update for the Galaxy S6 family.

The Galaxy S6 series was launched way back in 2015. If you still have a Galaxy S6, S6 Edge, or S6 Edge+ laying around, then it’s your time. This is a rather small update rolling out in Netherlands and Belgium. It’s not a major Android update, just a particular patch. Anyway, it’s still interesting to see old devices getting support. Interestingly, they are the latest on a list of old smartphones getting updates. Samsung recently rolled out updates for the Galaxy S8 and Galaxy S7. What is the next? Galaxy S5? Time will tell. 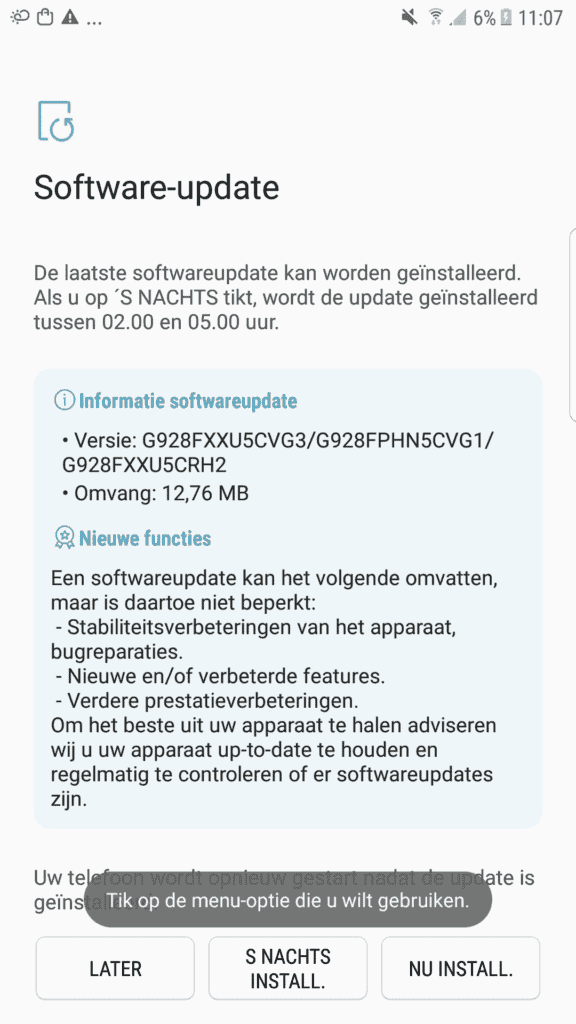 The update is rolling out for customers that have the Vodafone versions of the S6 and S6 Edge. These devices are getting firmware versions G920FXXU6EVG1 and G925FXXU6EVG3, respectively. In Belgium, it is the SIM-free Samsung Galaxy S6 and Galaxy S6 Edge+ that are getting the update. We believe that Samsung will slowly expand this update to cover all S6 versions. That includes the carrier and unlocked ones. You can keep checking the update manually to see if your time has come.

What is this update for the Samsung Galaxy S6 big deal?

Unfortunately, Samsung’s changelog for the Galaxy S6 series update is rather shady. The update does not mention a GPS fix as it did for the S8. There are improvements for stability and bug fixes. Moreover, it cites “new and/or improved features” and “further performance improvements”. Honestly, these are just generic, but we can’t expect much for an update with 13 MB. There isn’t any security patch for these models. However, Samsung is not offering this kind of support for such old models.

Other devices from 2018 are still getting security patches. However, the frequency of these updates is reduced in a progressive form. Anyway, it’s interesting to see updates coming for old devices. After all, Samsung could simply leave them alone.