The U.S. Securities and Exchange Commission has fined Morgan Stanley Smith Barney (MSSB) $35 million. The fine is because it did not keep the personal identification of its customers safe for five years. According to reports, the SEC claims that Morgan Stanley did fail to destroy relevant hard drives. These hard drives have clients’ personal data in them. The SEC also claims that the company hired unqualified firms to help destroy the hard drives. 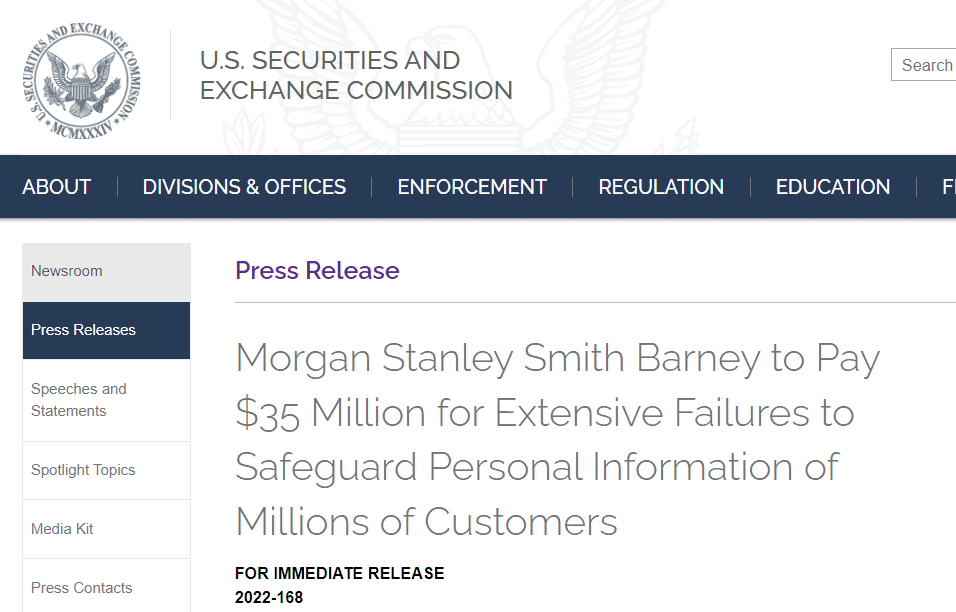 Findings by the SEC reveal that Morgan Stanley did not properly dispose of storage devices containing its customers’ PII back in 2015. In multiple cases, Morgan Stanley had business dealings with inexperienced companies. These companies were contracted for data destruction services to retire thousands of HDD drives. However, the investigation reveals that the company has no experience or expertise in the job. These drives contain millions of customers’ personal information.

However, instead of destroying the hard drives and servers, these companies did not. Instead, these companies sold the data to third parties. Eventually, these data found their way into the internet. In the end, Morgan Stanley found that 42 servers had been lost or stolen by contract companies. Furthermore, Morgan Stanley’s decommissioned devices are inherently encrypted. However, the company hasn’t activated the encryption software for years.

Without admitting or denying its findings, Morgan Stanley agreed to the SEC’s order. It violated the safeguards and disposition rules under Regulation SP. Also, without any objections, Morgan Stanley will pay the fine.

In a recent statement from Adams Jonas, a Morgan Stanley analyst, Tesla production this year may hit 2 million. This means that Tesla’s growth rate will be higher than the already quite high 2021 deliveries. Jonas claims Tesla could produce 2 million vehicles in 2022 for two reasons.

The first reason is Tesla’s strong growth trend in the fourth quarter. Fourth-quarter deliveries rose 71% to 308,600 vehicles, beating analyst expectations. Even on a sequential basis, Tesla’s growth was strong, up 28% compared to 241,391 vehicles in the third quarter. Such increases are meaningful for Tesla’s growth trends at a time when the auto industry is facing a severe parts supply crunch.

The second reason is the new factories. After nearly a year of construction, Tesla’s factories in Austin and Berlin are about to open. Jonas expects Tesla’s annual production to grow to nearly 3 million vehicles from just over 1 million at the end of the third quarter of 2021 once the two plants reach capacity.

How to Write Date in Arabic In Nigeria – Nigerian Tech