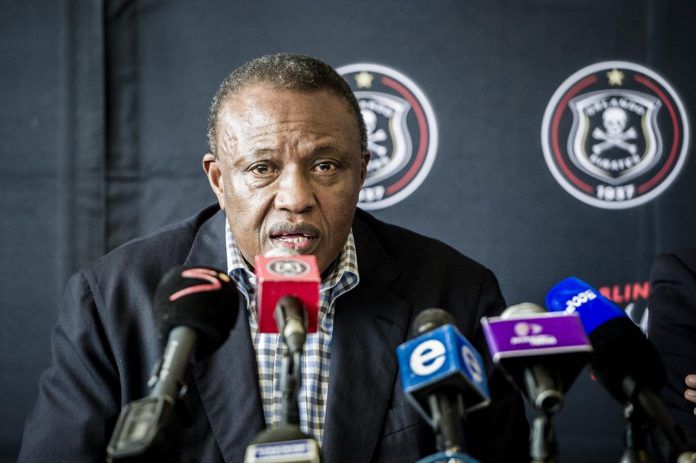 Orlando Pirates forgotten star Gabadinho Mhango has sent a stern reminder to the club’s management after another stellar performance at the Africa Cup of Nations tournament!

The Malawian attacker has been frozen out at the Buccaneers this season due to off-field issues however his AFCON form will be leaving Mandla Ncikazi and Fadlu Davids with sleepless nights.

Orlando Pirates have struggled in front of goal this season with their top goal scorers (Deon Hotto and Kwame Peprah) only reaching the four goal mark at the halfway point of the season.

Mhango’s superb form in Cameroon at AFCON 2021 has shown the Buccaneers faithful exactly what they’ve been missing out on this season!

Orlando Pirates star shows Bucs what they’re missing out on!

Mhango grabbed his third goal for Malawi in Cameroon in their last 16 clash against Morocco on Tuesday night in stunning fashion.

The Orlando Pirates star’s long-range strike opened the scoring for Malawi in the 7th minute however Youssef En-Neysri’s header leveled matters on the stroke of half-time.

It took another emphatic strike to win the match with Paris Saint-Germain’s Achraf Hakimi rifling home a freekick from range in the 70th minute.

There was no coming back for Malawi with Morocco proceeding to the quarterfinals while Orlando Pirates star Gabadinho Mhango and his Malawi crashed out at the last 16 hurdle after a superb group stage campaign.

Mhango has struggled at Orlando Pirates this season due to off-field problems however his AFCON form will undoubtedly have coach Mandla Ncikazi and Fadlu Davids smiling!

The Malawian attacker has only featured four times for the Buccaneers this season. Reports suggest he was frozen out at the club due to misconduct off the field of play.

“It was reported that Malawian Orlando Pirate’s player, Gabadinho Mango, a striker for the local football club was locked in and confined in Club Propaganda in Pretoria a consequence of incurring a R26 000 bill after buying strangers drinks in the popular Club frequented by famous personalities from Johannesburg and Pretoria.” SundayWorld reported.

“The Malawian (Mhango) is said to have been detained for hours by the security personnel of Club Propaganda who wanted the bill paid but after many stories, the striker admitted to having no money to settle the bill, it said that the striker and Club Manager came to an agreement which excluded the summoning of Police.”