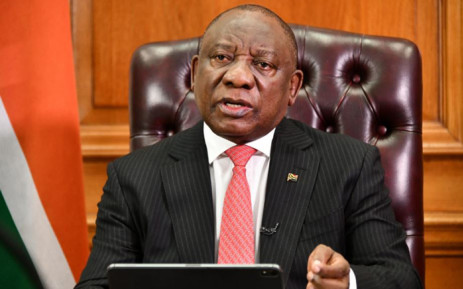 The president stated that his death caused a lot of chaos as most of the legend’s fan were not expecting his death.

Recall, Mabena passed away on Monday, 10th August, 2020 in a Centurion hospital on Monday at the age of 51.

Many of his fellow celebrities also took to their social media to pay tribute to the legend.

However, Ramaphosa has applauded Mabena for the role he played in mentoring and paving the way for many emerging broadcasters to achieve their own success “in a dynamic and competitive entertainment and broadcast industry.”

In his condolense to his family, hew stated that the legend paved way for other broadcasters.

“Mabena represented a voice of black youth and an outlet for young black musical talents at a time when black people in South Africa had little yo look up to.”

“His exceptional talent and voice of reason and insight reached millions of South Africans in their homes, workplaces and vehicles.

It is very sad that such an iconic and household voice has gone silent. May his soul rest in peace,” says Ramaphosa.

“This is a sad loss not only to Bob’s family and friends, but to the broadcast fraternity and the country. His exceptional talent and voice of reason and insight reached millions of South Africans in their homes, workplaces and vehicles.”

May his soul rest in peace.

A$AP Ferg Opens Up About Relationship with A$AP Mob

you can have your kids and wear them whatever you want

Next Rated Pastor Blogger - September 28, 2020 0
The duo of Oluwa Saint And Favour B who are known together as VibesNation has Come Up...

Editorial / Review Lovabledaniels - September 27, 2020 0
Judging by the new data published on the web, fans of Apple smartphones will have to pay a lot to join the 5G club....

World Entertainment Lovabledaniels - September 28, 2020 0
Former Big Brother Naija (BBNaija) housemates Ozo and Nengi were definitely a pair that gave fans of the show an interesting time even though...

World Entertainment Lovabledaniels - September 27, 2020 0
Zoe Mthiyane1Zoe Mthiyane’s colleagues say she left Rapulana Seiphemo because he was unfaithful. Generations: The Legacy actress Zoe Mthiyane has confirmed that she and therefore...

World Entertainment Lovabledaniels - May 11, 2020 0
Actor Sicelo Buthelezi could be a new kid on the block, but...