Realme Narzo 50i Prime Gets A Huge Discount On AliExpress

The Realme Narzo 50i Prime will be available for purchase on AliExpress starting from June 27. Moreover, you can take advantage of the early bird price offer. Realme will be doling out a notable discount on the handset. The Narzo 50i Prime would normally set you back $142.71. However, you will be able to purchase it for only $99.99 on AliExpress. Further, you will be able to choose between Mint Green and Dark Blue color options.

The 3GB RAM+ 32GB storage variant will carry a price tag of $142.71. Alternatively, you can go for the 4GB RAM+64GB storage model if you are willing to shell out $157. Notably, both models will receive a discount with an early bird price. So, the base model will retail for only $99.99. Likewise, the higher-end variant will cost just $109.9. However, it is worth mentioning here that the deal will be available from June 27 to July 1, 2022. Both variants will go back to their original asking price once the promo ends.

Regrettably, details about the Narzo 50i Prime Indian variant’s launch are still scarce. However, Industry sources claim that the handset will land in India soon. Also, it could cost INR 7,820 for the base model, and INR 8,600 for the higher-end variant in India. Now, the awe-inspiring design of the Narzo 50i Prime is a head-turner. It sports an eye-catching vertical stripe and has an ultra-slim body of 8.55mm. Further, the handset weighs only 182 grams.

The Realme Narzo 50i Prime is one of the lightest and thinnest handsets in its price segment. Moreover, it packs a Unisoc T612 chipset under the hood. it features an octa-core 12nm processor clocking up to 1.82 GHz. It gets a Mali G52 GPU for graphics as well. Also, it has an impressive AnTuTu benchmark score of 20,98, and 32. These are the best scores in the segment. The smartphone’s UFS2.2 high-speed flash storage reads and writes data 3 times faster compared to the eMMC 5.1. The phone sports a 6.5-inch LCD panel with HD+ resolution. 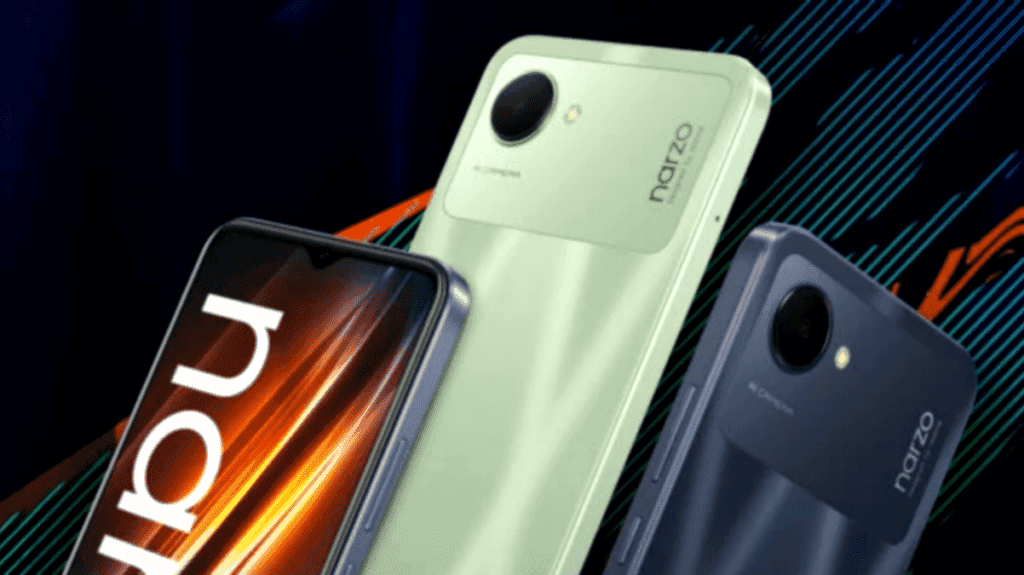 Moreover, it has a waterdrop notch to house the selfie camera. For optics, the Narzo 50i Prime has an 8MP sensor with an LED flash on the back. Also, there’s a 5MP front shooter for capturing selfies and video calls. A robust 5000mAh battery unit powers up the entire system. This cell comes with 10W charging support. Further, it features a micro-USB port for charging. It comes with A-GPS, Bluetooth 5.1, GPS, WiFi, and 4G connectivity. The Dual-SIM smartphone has a 3.5mm headphone jack. Lastly, it runs Android 11 GO Edition.