Samsung Galaxy F-series is known for its focus on cameras and also its exclusivity for select markets. In fact, not many original devices came for these series, most of them are rebrands of existing Galaxy A or M-series smartphones. Now, it seems that Samsung is working on a new rebrand for the 2022 season. The new smartphone will arrive with Galaxy F23 5G moniker and has just been listed by the Geekbench benchmark.

The Galaxy F23 carries the SM-E236B model number and apparently will reach some markets as Galaxy M23. Let’s see which device will come first, and then, we’ll be able to tell which one is the original or the rebrand. Anyway, the handset ran the Geekbench benchmark carrying a very familiar Qualcomm Snapdragon 750G SoC. To those unaware, this chipset is a more cost-effective 5G chip for the Snapdragon 700 series. The SoC is inside smartphones as the Galaxy A52 5G and even the OnePlus Nord CE. However, it became obsolete in light of better offerings such as the Dimensity chips and even the Snapdragon 778G. However, it’s still a very good SoC when you take price into consideration. 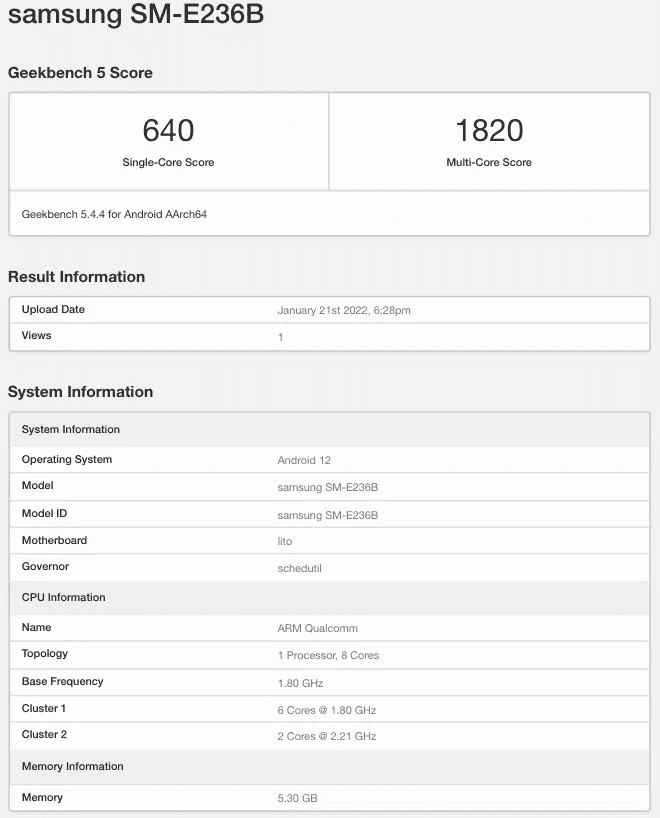 The Galaxy F23 5G was tested using Geekbench 5 standards. The device scored 640 points in the single-core tests and 1,820 points in the multi-core department. The listing also confirms the presence of an Octa-Core Qualcomm Snapdragon processor with codename lito. The benchmark also confirms 6 GB of RAM for this particular version, but we can also expect other RAM variations. Moreover, this SoC comes with the Adreno 619 GPU. Interestingly, it runs Android 12 straight out of the box which means One UI 4 will be running on top.

Galaxy F23 5G can be a few months away

This is the first time that the Galaxy F23 5G appears online, however, we expect more details to emerge in the coming weeks. We can’t even determine a possible launch date for this smartphone. After all, Samsung smartphones are known for leaking several months ahead of their launch. The device could come anytime in the next few months. We expect more leaks to appear ahead of the release. However, it seems plausible to expect a powerful selfie camera, AMOLED display, and a big battery.

For now, all the eyes are looking to Samsung’s Galaxy Unpacked event. During the showcase, the company will reveal the Galaxy S22 series and the Galaxy Tab S8 series with Exynos 2200 SoCs and other novelties.