Thuli Phongolo’s R20K per Hour Booking Fee Causes a Stir Online: “All That for Her to Play a Pre Recorded Mix”

Thuli Phongolo is out to get the bag and is not compromising. The stunner got tongues wagging when a flyer that contained her booking fees and other requirements went viral.

According to the flyer posted by controversial entertainment blogger Musa Khawula, The Wife star charges a minimum of R20K an hour to play at gigs. 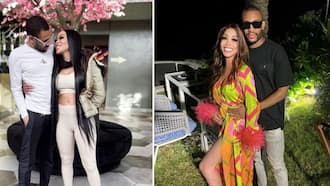 Khanyi Mbau and Kudzai Mushonga leave SA drooling with their lavish Dubai lifestyle: “They have it all”

ZAlebs added that the hefty bill also comes with a long list of other fancy stuff, including business class tickets for the stunner and her manager, security, five-star hotel accommodation and many more.

The now-viral post caused a stir on Twitter. Peeps feel the stunner is not that good, and others even alleged that she plays pre-recorded mixtapes at gigs.

“Imagine paying all this just to get imix ka Takalani Sesame.”

“I feel like we give female DJs a pass when they play nonsense because it’s a female. That madness must stop. They have to be measured to the standard of men because it’s not doing women any favours. They must be treated equal to men. This lady is well-known but she plays nonsense.”

“Security for what? To guard the USB she uses when playing a pre-recorded mix?”

In more entertainment news, Briefly News previously reported that Somizi Mhlongo and Vusi Nova have kept fans suspicious about their relationship’s nature. The two Mzansi celebs began hanging out soon afterSomizi’s divorce from estranged hubby Mohale Motaung and fans started suspecting that they were in a romantic relationship.

The Ndikuthandile singer and Idols SA judge have rubbished the rumours remaining adamant that they are “just friends”.

Recently, the two stars had the social media streets buzzing when they shared saucy snaps from their ”bestication” getaway. Somizi headed to his Instagram page to share a picture where he was embracing the Intliziyo singer.

R. Kelly’s Fiancée Doubles Down On Pregnancy Claims After Lawyer Calls Her “Insane”