TikTok announced a new program that allows viewers to pay to subscribe to the live broadcasters they want to support. Dubbed “TikTok LIVE,” fans buy into the program and enjoy perks like subscriber-only chat, creator-only emotes, and badges that differentiate them from non-subscribers. According to an announcement video posted on the TikTok Live Creator page, it will launch in beta on May 26. 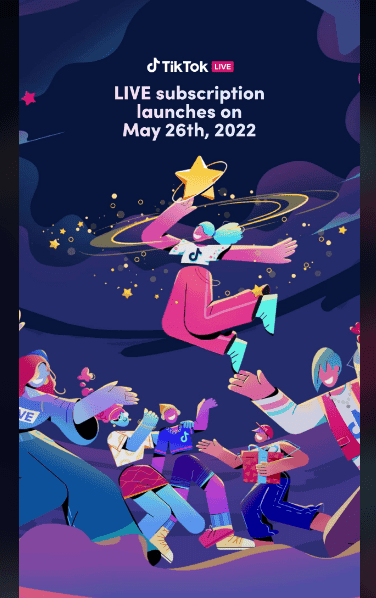 Earlier this month, TikTok also announced that it would start sharing a portion of ad revenue with eligible creators. Streamers participating in the Creators Program can also receive “gifts,” or tips from viewers. This will come in the form of in-app currency that can be exchanged for real money. With the TikTok LIVE subscription service, anchors have added new revenue channels. However, as of now, TikTok has not disclosed whether it will take a cut.

The TikTok announcement also reveals that one must be 18 years old or older to offer or purchase a paid subscription. Furthermore, creators can only offer subscriptions if they have at least 1,000 followers. The company also claims that the program is currently only inviting select users to participate.

Chinese short video platform, TikTok is obviously one of the most used social media platforms globally. The company has been competing with bigger firms and it is even an inspiration to many big apps. Recently, analytical company, Sensor Tower released its list of most downloaded apps for April 2022. According to its reports, for April 2022, TikTok and Duoyin (Chinese version of TikTok) is in the first position. However, this is for the (non-game) download. These applications have more than 62 million downloads in April alone. This is higher than the same period of last year, a 6.1% growth.

In addition, Facebook ranks second with more than 56 million downloads, an increase of 8.9% compared to April last year. India was the largest market with 25.9% of downloads, followed by Indonesia with 8.2%.

We cancelled the Xiaomi 12 Ultra with Snapdragon 8 Gen 1