The FIFA World Cup 2022 has been kicked off in Qatar November 20th and ends at December 18th. Ulefone, as a world leading rugged phone brand, pays great attention to this world sport event too. To celebrate with many users and fans around the world, Ulefone decided to run a giveaway on Instagram. At the same time, a promotion sales is under way on their official global website. Let’s head over to learn more details of the Ulefone event, shall we？

Contents
Gizchina News of the weekDo you want an extra jersey ?Best rugged phones on sale

As per Ulefone Give Away rules on Instagram, there are 3 steps to take part in the contest. Firstly, users can pick the greatest rugged gear they think and shoot football themed pictures or videos with it. Secondly, share the post tagged #RuggedGOAT and #Ulefone, and also tag 3 friends in it. The activity lasts until December 18th, 2022. Thirdly, follow Ulefone on Instagram by then as well. Ulefone will select a best post as the winner every week to reward a Ulefone’s latest rugged phone. Worth noting, that fans can pay close attention to the Ulefone social media or official site during the World Cup to check back every week to know last week’s winner. 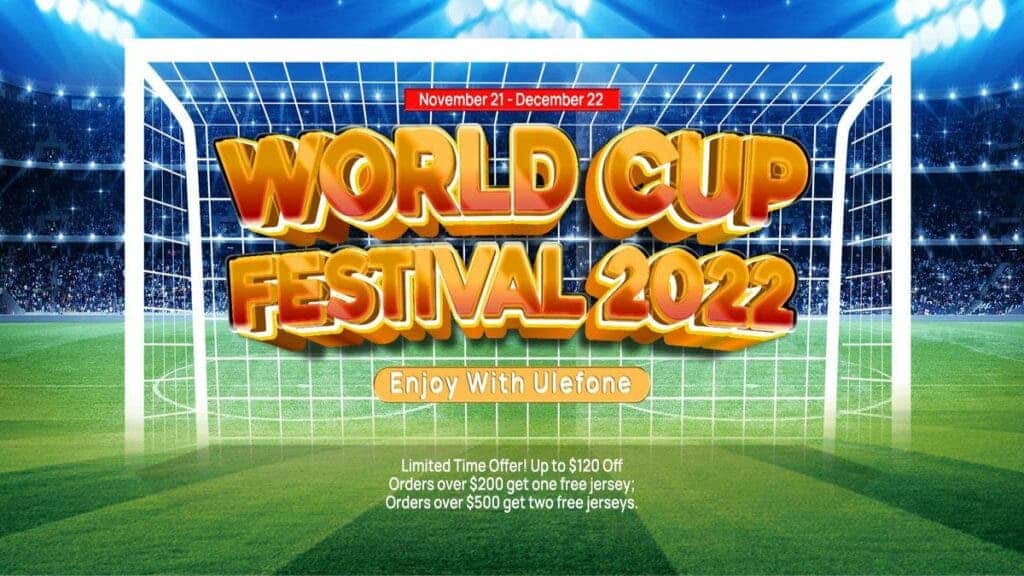 Do you want an extra jersey ?

In addition to the shooting and post contest on Instagram, Ulefone has prepared promotional sales for World Cup. According to the rules and policies of the activity, customers who place an order over $200 can get a free jersey. And two free jersey for orders over $500. The purchase should be done in the course of November 21st, 2022 – December 18th, 2022. Notably, as seen from the Ulefone official website, the price for the latest models and other competitive ones has been slashed a lot.

There will be also a prize-giving guessing contest on Ulefone social media after the group stage. It seems, that there are a mass of prizes for fans this time. And maybe you will be one of the winners. But before you get there, first step you need to do is following Ulefone mobile on social media.

And the sale highlights ? Let’s get started with the Power Armor 18T, the 5G thermal imaging flagship rugged phone of 2022. It comes with 108MP main camera, MediaTek Dimensity 900 5G chip, 120Hz ultra smooth display, up to 17GB RAM, 9600mAh massive battery or Android 12 OS. Another flagship model is the Armor 17Pro with great hardware as well. Such as the MediaTek Helio G99 chipset, 108MP pro-grade camera, 8MP night vision 2.0, up to 13GB RAM or 120Hz FHD+ ultra display. Thirdly, the Power Armor 16 Pro with 122dB loudest speaker, built-in glare flashlight, 9600mAh huge battery and exclusive desk charging dock. Or how about a rugged phone with built in TWS earbuds ? Armor 15 is the answer. In the Armor X series, the Armor X11 Pro is a new arrival with massive 8150 mAh battery and compact  5.45-inch screen.

The new AnTuTu kings have been announced

US lawmakers allow government contractors to use Chinese chips · Lovablevibes

Check the official design of the Xiaomi 13 smartphone